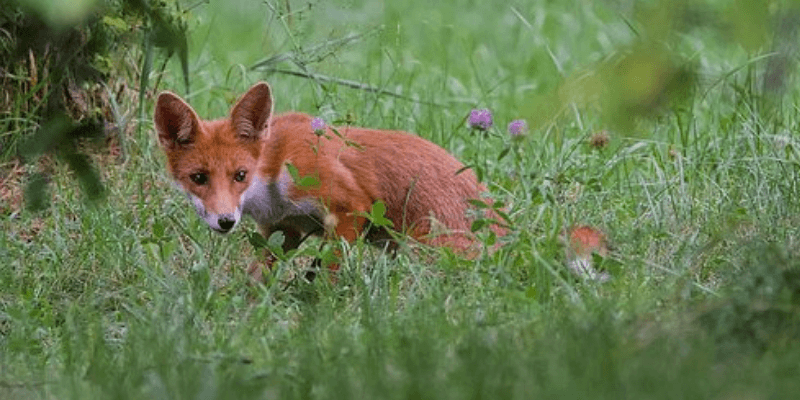 Fox in the park

Something startled him. He darted like an arrow, russet-brown, still slightly fluffy, out of the wildflower corner and up to the tennis courts, where he wheeled around. He was fully alive, wide-eyed at his surroundings, astonished at finding out that he could run. A magpie swooped over him with a torrent of raspy chatter. Squirrels, two of them, in the ash tree, barked out a chirpy alarm. He was one of this year’s cubs. He flashed off through the hedge and into a drive on Elms Road. I watched him disappear in the fluid way foxes have, vanishing into air.
A man was ambling along the path behind me. I remarked, as a pleasantry, how lucky we are to have wildlife in the park like this. “Them’s all vermin,” he replied. “Ought to be shot. Or gassed. Vermin.” He strolled on out of the park gate.

Back home, I looked the word up in the Oxford English Dictionary, which stated:
‘vermyn,> vermyne, vermynne, verming, vermine, vermin: ‘Animals of a noxious or objectionable kind…’
Orig. applied to reptiles, stealthy or slinking animals, and various wild beasts; now, except in U.S. and Austral. usage almost entirely restricted to those animals or birds which prey upon preserved game, crops, etc
Applied to creeping or wingless insects (and other minute animals) of a loathsome or offensive appearance or character, esp. those which infest or are parasitic on living beings and plants; also occasionally applied to winged insects of a troublesome nature.
fig. Applied to persons of a noxious, vile, objectionable, or offensive character or type. Frequently used as a term of abuse or opprobrium; in modern dialect sometimes without serious implication of bad qualities.

“Vermin” have a long and complex history. Were there verminous animals on Noah’s ark? Genesis gives very little guidance on this point: ‘And of every living thing of all flesh you shall bring two of every sort into the ark, to keep them alive with you; they shall be male and female. Of the birds after their kind, of animals after their kind, and of every creeping thing of the earth after its kind, two of every kind will come to you to keep them alive.’ – Genesis chapter 6, verses 19-20.

Another Biblical passage has been of enormous importance in human-animal relations:
And God said, Let us make man in our image, after our likeness: and let them have dominion over the fish of the sea, and over the fowl of the air, and over the cattle, and over all the earth, and over every creeping thing that creepeth upon the earth. – Genesis chapter 1, verse 26.
Human “dominion” has been particularly unkind to animals. I wonder what was in the mind of the translator of the St James’ Bible when he chose that word.
The OED sets out the most common framing of the concept; vermin compete with man for food, often for food on which he has expended time and effort. Under Tudor “vermin laws”, creatures which ate crops were so reviled that parishes paid bounties for their lifeless bodies. The red kite, one of our most beautiful birds, was regarded as vermin, and was made extinct by the 20th century. The effort of reintroducing it is complicated and difficult.

The Elizabethans expanded the definition of vermin to include hedgehogs, stoats, weasels, foxes…. add what you wish – rodents, termites, cockroaches, lice, bedbugs, rats, mice, ferrets, crows, pigeons, jays……..Inevitably, the concept stretched eventually to certain groups of people, the poor, vagabonds, those considered subhuman. This has led to immeasurable, irremediable tragedy.
Looking deeper, I found many fascinating things…….e.g. The vermin-killer being a very necessary family-book, containing exact rules and directions for the artificial-killing and destroying of all manner of vermin, &c. : rats and mice, moles, pismires, flyes, fleas & lice, adders, snakes, weasles, catterpillars, buggs, froggs, &c. : whereunto is added the art of taking of all sorts of fish and foul, with many other observations never before extant …… published in 1680, and still available in Early English Books Online (paywalled).
Another “family book” published in 1688 states, with great authority, that foxes “ killed 1,000 lambs, 2,000 poultry, and 4,000 pairs of rabbits every year”, but without specifying its statistical methodology or citing any evidence. Foxes were clearly regarded as a very serious problem. There are no figures for the number of lambs and poultry killed and eaten by people.(1)
A chilling account of the relish and assiduity with which the English have waged war on wildlife can be found in Silent Fields, by Roger Lovegrove, published in 2008. (2)

Trading expeditions and colonial expansion depended on ships, and ships transported silent creatures to places where they were not wanted and could do considerable harm by threatening the food supplies on which colonisers depended. The Spaniards are credited with bringing rats and mice to South America. A plague of rats tormented the first English plantation in Bermuda. In 2011, non-native animals brought to the Galapagos in the seventeenth century were confronted and killed. Also in 2011, animal rights activists stole one hundred mutant mice from a laboratory in Milan. The fate of the mice is not known. Perhaps they are breeding menacingly, somewhere, a black army of vengeance, waiting patiently for the day of parturition, the day they throb exultantly back into life and tear the world apart.

Today, when bad harvests or famine do not seem to be particular threats, at least in rich countries, the demonising of creatures which take human food or seem to impinge on the rights of a particular group, is still remarkably active. Very recently, the group Wild Justice challenged the lawfulness of shooting licences issued by Natural England. (3) The resulting outrage and fury of those who consider they have an inalienable right to shoot whatever they please whenever they take it into their heads to do so, has inundated the airwaves and social media in an apoplectic tsunami of shotguns, gaiters, ferrets and flat caps. A naturalist and presenter has been threatened with summary execution. A car crash can be arranged. (4)

Vermin, the media tell us, invariably invade, infest and infect. Rather like human beings, in fact. What do we really think of that frightened, furtive cub, astonished and beautiful, running in the park, just like us, our children? Why was he immediately conceptualised as “vermin”, with a demand that he be summarily killed? Several times, my research brought up discussions of the “cruelty connection,” the use of cruelty to animals as an indicator of cruelty to people, used by police and doctors considering serial killers, vile crimes. And it yielded, frequently, the words of Jeremy Bentham… “
The question is not, Can they reason? nor, Can they talk? but, Can they suffer?”
Run, little foxy. Pounce into the long grass with glee and peep out at me from the frowsy hedge. Skulk along the edge of the railings and help yourself to the pizza and chips. Stick your muzzle into the nettles, chase the butterflies, toss up the dew. Charge at the magpies and zigzag like a dervish among the crows. Hold your brush up into the air and lunge on the beetles, crunching them like nuts in your powerful jaws. I am watchful. If they come for you with Zyklon B, they’ll have to gas me first. Maybe they will.