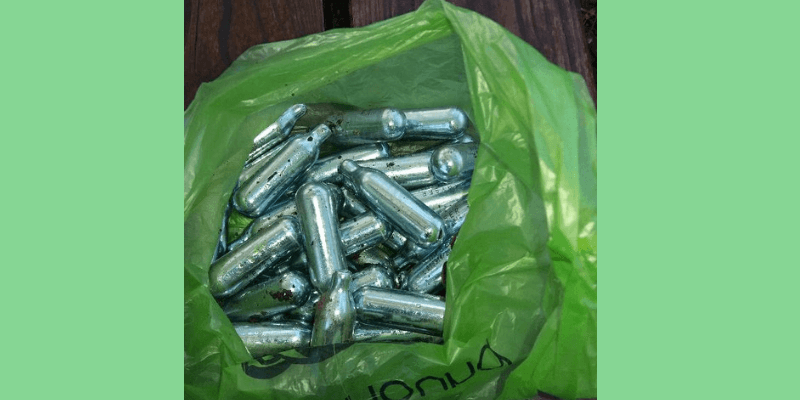 Laughing matters in the park?

Catherine D muses about whippits (the items, not the canines)

Unsightly litter in the park often meets the eye. Such rubbish has to be picked up, shoved wearily into ghoulish black bags and disposed of. Invariably, one asks oneself, holding up a discarded umbrella, a well-pecked clam shell, or a half-gnawed stuffed crust meatilicious with mozzarella, extra sausage, garlic butter, and ventricini salami, can this be recycled? Probably not.
Can whippits be recycled?
Whippits are steel cylinders filled with nitrous oxide, which is used as a whipping agent in a whipped-cream dispenser; the oxide can also be used as a recreational drug. It’s thought that nitrous oxide was first synthesised by Joseph Priestley in 1772. Others attribute its discovery to Humphrey Davy, a one time president of the Royal Society.

Whippits have been discarded in the park in their hundreds this past year, more in the summer than these colder nights. We’ve become inured, over the years, for the park to function as a sort of al fresco cannabis café, complete with loud music, energetic leaping backwards and forwards over the railings, and gushing micturition, but the inundation of the whippits and their pretty balloons is a more recent phenomenon. In order to recycle them, the litter volunteers would have to separate them from the rest of the detruitus, and then, most likely, ask the Council if they would accept them and sell them on to a scrap metal dealer. They look as if they are made from decent steel, and are probably galvanised with zinc. They could be given to the very pleasant gentlemen who come around emptying the bins. A little extra cash for a financially challenged council? Unfortunately not. Scrap metal dealers have to crush their wares; the presence of even small numbers of unopened whippits would cause an explosion. It’s not worth the risk. They have to go to landfill.

Leaving the pithy issue of recycling to one side, should we be afraid of the effect of these little canisters of gas? Whippits usually induce a short-lasting euphoric state, often with dream-like hallucinations. According to the Global Drug Survey, nitrous oxide is the second most popular drug in the UK. The Psychedelic Society states that “the conscious use of psychedelics can help create a more compassionate and joyful world through the healing and growth of the individual……..”, and they argue, rightly, that various substances “have been used by humans for tens of thousands of years for healing and spiritual development”.

Should the use of whippits taken as a a matter of personal liberty? Virtually any substance can be dangerous if taken or used irresponsibly. One is free to buy cigarettes and alcohol, to go bungee jumping, drive at very high speeds, to leap out of an airplane. Is the individual drug user harming anyone other than him or herself? Is this an absolute right? At what point does an individual right become a societal danger?

The cultivation and production of drugs, and the supply of them to others, is illegal under the Misuse of Drugs Act 1971. Drug supply and “pushing” are usually associated with exploitation of the vulnerable, violence and organised criminal gangs. The government insists that it is illegal to sell nitrous oxide under the 2016 Psychoactive Substances Act, but others insist it falls under a medicinal exemption. “Food grade” nitrous oxide is very widely available from Amazon etc.

Perhaps one should think more of the health aspects. What does PubMed say? A 2015 article (http://pmid.us/26496821) points out that is in constant use as a safe anaesthetic, but also notes that: “Following one inhalation, mostly from a balloon, a euphoric, pleasant, joyful, empathogenic and sometimes hallucinogenic effect is rapidly induced (within 10 s) and disappears within some minutes…..” It goes on to discuss side effects, and concludes: “(potential) users should be informed about the risk of vitamin B12-deficiency related neurological and hematological effects associated with heavy use.”
Perhaps it is just like alcohol and tobacco; the odd fag and the odd drink will probably do you no harm. How much is too much? How do we conceptualise risk?
In the 1959 film, “Carry on Nurse”, an operating team dissolves into giggles as the laughing gas has been left on. Fortunately, a nurse arrives in time to save the day.

images: Feature picture – whippits, along with a store of emptied Black Carling,  found by a park bench in October 2019. If a stern nurse was needed that night, let’s hope one turned up in time.
Cigarettes: Canva free images
Carry on film: Anglo-Amalgamated Productions

← Previous: Please support our plan to rejuvenate the playing field
Back to Blog
Next: Fox in the park →
This website uses cookies to improve your experience. We'll assume you're ok with this, but you can opt-out if you wish.Accept Read More
Privacy & Cookies Policy