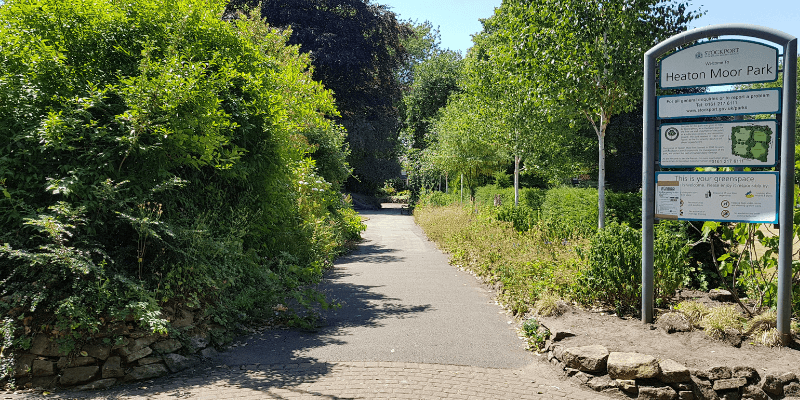 Our park: could it work smarter, not harder?

Catherine D has been researching smart cities and muses on the possibililty of Heaton Moor Smart Park.

Many of us have spent time looking quizzically at the “Smart Motorway” signs above the M60 carriageway as we sit for hours, in Biblical traffic jams. Perhaps the concept of the “Smart Motorway” has not been perfected yet. Yet one hears increasingly more about the “Smart City” – the connected metropolis, the digital urbs, the people-centric, technology-driven, non-stop innovation clusters, teeming with technology.

Could there be a “smart park”? Could technology assist the park in its goals of offering a calm haven with environmental, social and health benefits, and even, that greatest Holy Grail of all, cost reductions?

The Victorians thought that the provision of parks would lead to ”a better use of Sundays and the replacement of the debasing pleasures” (1). The working class was thought to need “rational amusement”. (2) The 1875 Public Health Act empowered Local Authorities to raise loans for the purpose of buying land for recreation. “Recreation” on the Sabbath was becoming very slowly more acceptable for the growing population. Heaton Moor Park still exhibits many of the characteristics of a classic Victorian park. Although we do not know a great deal about the park in its earliest days, today it still has a tennis court, a bowling green, mature trees, and, thanks to the Friends of Heaton Moor Park, a high standard of horticultural maintenance and care.

However, great change is possible, if not easy and almost certainly not without cost. Astonishing advances in technology, historically, have not played a major role in park design or development and operations, but that is changing. Consider, for instance, smart benches. Benches can now be solar-powered and can serve as Wi-Fi “hotspots”; they can have sensors to monitor pedestrian activity, air quality, noise levels. Being solar powered, the benches would use very clean energy.

The never-ending headache of litter and rubbish in the park might be alleviated by solar powered compacting waste bins. These smart bins can sort rubbish into categories, using object recognition, artificial intelligence and data processing. They can alert maintenance services when they need to be emptied.

The cloverleaf and football pitch might lend themselves well to automatic lawn mowers, being large areas of grass which require regular mowing. Because the mower is automatic, it can be programmed to run every day or several times per week. In an ideal scenario, these mowers could hum quietly in the pavilion, recharging themselves, and trundle out when needed; being electric, they would produce no carbon emissions. They could be programmed to reduce green waste by producing very fine clippings that naturally compost back into the soil. When finished, they would rumble back into the pavilion with minimal human supervision.

They would, however, require a low-voltage wire, or “invisible fence” to delimit their operations. Other constraints might be the energetic goldendoodle Austin, and the frisky Staffie, Lily, who would be delighted with their new friends and want to gambol and play with them; the redoutable Louie and the other labradors, being endlessly ravenous, might try to eat them. And it is not impossible that Samuel, fearless Buckingham Road moggy, would charge out of the bushes and assail them with his terrible claws, trying to kill them. But they are generally of very robust design.

The runners could become a lucrative resource were the park to install piezoelectric tiles, which can generate electricity and collect data about the number of footsteps recorded. If installed with motion sensors, these tiles could turn on lights when motion is detected, making the park safer after dark.

The running group like running in the dark, and running backwards, and other challenging forms of activity. Data generated from this could be programmed to power informational displays with individual fitness data, thus encouraging the slower ones to keep up. Such tiles are in use at the NASA’s Kennedy Space Center’s Visitor Complex at Cape Canaveral in the USA.

Interestingly, in 2013, officials in the city of Melbourne assigned an ID number and email address to each of the city’s trees, so that dangerous branches or other problems could be reported. An unintended consequence was the electronic outpouring of love from citizens to the trees which have so much significance for their daily lives. Melbourne trees get love letters.

Were this facility available in the park, I would impress on the chestnut tree and the beech trees how much I admire their fecundity, and I would tell the hollies how much I love the way the sun stipples on their shining leaves. I would tell the huge tree trunk that, although it is now fallen, it still seems enormously strong and significant and is still a magnificent presence. I would tell the magnolias how glorious is their tossing of their blossoms. I would tell the tree with the hole in its trunk how I sat for hours watching the woodpecker feed her young inside. I would construct a mailing list of every one of them and tell them simply that I think they are great healers.

For our park in the future, I think it is safe to say that we all want equitable access, safe features, and effective and resilient maintenance. The goal of community well-being is a challenging one, but one in which the park has many subtle roles to play. The evolving Internet of Things may well help us plan creatively and proactively for our much-loved places, even on the most miserable of budgets.

(1) In 1833 the Select Committee on Public Walks reported to Parliament, highlighting the benefits parks could bring. https://api.parliament.uk/historic-hansard/commons/1833/feb/21/public-health

(2) For the idea of culture as ‘instructive’ and ‘harmonizing’, a force for moral order in America, see Levine, Highbrow/Lowbrow: the emergence of cultural hierarchy, Harvard UP, 1990; for culture as rational recreation in England, see P Bailey, Leisure and Class in Victorian England: Rational Recreation and the Contest for Control (London, 1987; orig. pub. London, 1978).

← Previous: Tidy in the Park - Notes from 8 Sept 2018
Back to Blog
Next: Have YOU had YOUR say about council proposals for a new play area? →
This website uses cookies to improve your experience. We'll assume you're ok with this, but you can opt-out if you wish.Accept Read More
Privacy & Cookies Policy